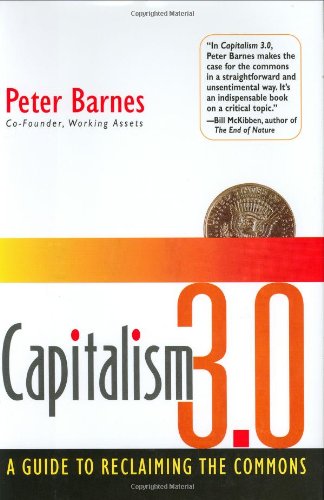 Capitalism 3.0: A Guide to Reclaiming the Commons
by Peter Barnes

Description:
Barnes' idea is that we need to use a 3rd institution - "the commons" - to develop a better form a capitalism that takes into account natural resources that are used and not accounted for. This is needed, because government has failed to do a good job in this regard and is subject by capture by industry, something that is very prevalent in the USA. The commons works by being above the short term exigencies of businessmen and politicians, using the power of property rights under legal trusteeship to ensure that the commons under trust are best used for the long term.

Charade of the Debt Crisis
by Steven Kim - MintKit Press
In complex fields such as finance and economics, a common blunder involves a mix-up between the destination and the journey. The confusion is showcased by the hoopla during the financial crisis of 2008 in tandem with the debt crisis in Europe...
(6687 views)

Bourbon for Breakfast: Living Outside the Statist Quo
by Jeffrey A. Tucker - Ludwig von Mises Institute
The state makes a mess of everything it touches. Tucker proposes this path: see how the state has distorted daily life, rethink how things would work without the state, and fight against the intervention in every way that is permitted.
(6409 views)

America's Great Depression
by Murray N. Rothbard - Ludwig Von Mises Institute
A staple of modern economic literature, crucial for understanding a pivotal event in American and world history. It is the definitive treatment of the causes of the depression. The book remains canonical today because the debate is still very alive.
(10889 views)