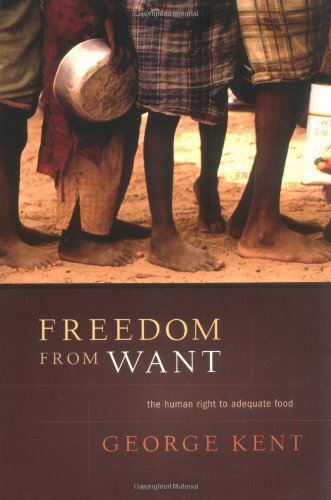 Freedom from Want: The Human Right to Adequate Food
by George Kent

Description:
This is both a descriptive and normative argument that worldwide hunger is best addressed as a human rights issue. Kent analyzes the current deplorable state of world hunger and malnutrition, demonstrating how governments, not food shortages or climates or famine, are to blame. Adequate food as a human right requires that governments provide the resources and freedom to allow individuals and communities to provide for themselves. The manuscript includes numerous tables and illustrations, as well as a bibliographic essay.

Tortured Justice: Using Coerced Evidence to Prosecute Terrorist Suspects
by Deborah Colson, Avi Cover - Human Rights First
The book finds the Bush Administration has undercut its own intended use of the military commission system at Guantanamo Bay by allowing the admission of coerced evidence. The report focuses on six prisoners who have alleged abuse while in custody.
(7460 views)

Can Human Rights Survive?
by Conor Gearty - Cambridge University Press
In this set of three essays, originally presented in 2005, Conor Gearty considers whether human rights can survive the challenges of the war on terror, the revival of political religion, and the steady erosion of the world's natural resources.
(5524 views)

Imagining Human Rights
by Susanne Kaul, David Kim - De Gruyter Open Ltd
Why are human rights considered inviolable norms although many countries around the globe violate them? This paradox seems reducible to the discrepancy between idealism and reality in humanitarian affairs, but this book complicates this picture ...
(4810 views)