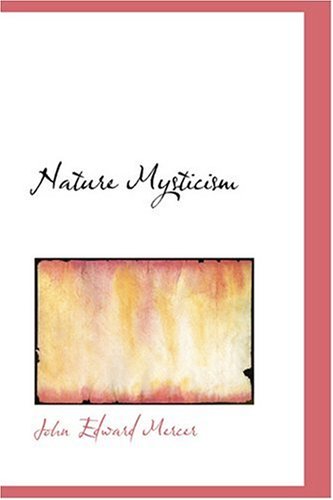 Description:
The subject of this book is Nature Mysticism. The phenomena of "nature" are to be studied in their mystical aspects. The wide term Mysticism is used because in spite of many misleading associations it is hard to replace.

Thus Spake Zarathustra
by Friedrich Nietzsche - Modern Library
This work is the first thorough statement of Nietzsche's philosophy, and also a masterpiece of literature. The book is a combination of prose and poetry, epigrams, and parodies. Nietzsche made here his famous statement that God is dead.
(14996 views)

Telemorphosis: Theory in the Era of Climate Change
by Tom Cohen (ed.) - MPublishing
This volume gathers notable philosophers to engage the predominant impasse of an emerging era of climate change and ecocatastrophic acceleration: that is, how critical practices inherited from 20th century thinkers alter at the current moment.
(7068 views)

Decision Theory: A Brief Introduction
by Sven Ove Hansson - KTH Stockholm
This text is a non-technical overview of modern decision theory. It is intended for university students with no previous acquaintance with the subject, and was primarily written for the participants of a course on risk analysis.
(10156 views)

What is Philosophy?: Embodiment, Signification, Ideality
by Jere Surber - re.press
The enterprise of philosophy has been under sustained attack throughout the 20th century. This work attempts to diagnose the roots of these assaults and responds to them by developing a new constructive and systematic 'image of philosophy.'
(5402 views)