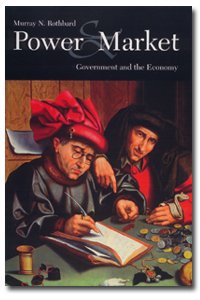 Power and Market: Government and the Economy
by Murray Rothbard

Description:
What can government do to enhance social and economic well being? Nothing, says Murray N. Rothbard. Power and Market contains the proof. It will inoculate the reader against the even the slightest temptation to invoke the state as a solution to any social or economic problem. It is ultimate manual for completely de-mystifying the myth of the state. The Rothbardian claim is perhaps the most radical made in the history of political economy.

Global Imbalances and the Collapse of Globalised Finance
by Anton Brender, Florence Pisani - Centre for European Policy Studies
The world economy is recovering from the most disastrous episode in the history of globalization. The authors argue that the main problems were deeply rooted and are to be found in two developments that for many years were left uncontrolled.
(13476 views)

Charade of the Debt Crisis
by Steven Kim - MintKit Press
In complex fields such as finance and economics, a common blunder involves a mix-up between the destination and the journey. The confusion is showcased by the hoopla during the financial crisis of 2008 in tandem with the debt crisis in Europe...
(6373 views)

Bourbon for Breakfast: Living Outside the Statist Quo
by Jeffrey A. Tucker - Ludwig von Mises Institute
The state makes a mess of everything it touches. Tucker proposes this path: see how the state has distorted daily life, rethink how things would work without the state, and fight against the intervention in every way that is permitted.
(6068 views)