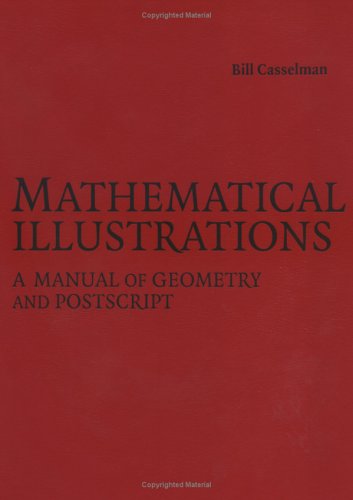 Mathematical Illustrations: A Manual of Geometry and PostScript
by Bill Casselman

Description:
The author gives an introduction to basic features of the PostScript language and shows how to use it for producing mathematical graphics. The book includes the discussion of the mathematics involved in computer graphics, and some comments on good style in mathematical illustration.

Euclid's Elements of Geometry
by J.L. Heiberg, R. Fitzpatrick
Euclid's Elements is the most famous mathematical work of classical antiquity, and also has the distinction of being the oldest continuously used mathematical textbook. The main subjects of the work are geometry, proportion, and number theory.
(7436 views)

The Modern Geometry of the Triangle
by William Gallatly - F. Hodgson
The author expresses his expectation, that these novel and interesting theorems some British, but the greater part derived from French and German sources will widen the outlook of our mathematical instructors and lend new vigour to their teaching.
(2895 views)

Coordinate Geometry
by Henry B. Fine, Henry D. Thompson - The MacMillan Company
Contents: Coordinates; The Straight Line; The Circle; The Parabola; The Ellipse; The Hyperbola; Transformation Of Coordinates; The General Equation Of The Second Degree; Sections Of A Cone; Systems Of Conics; Tangents And Polars Of The Conic; etc.
(12864 views)

The Pythagorean Theorem: Crown Jewel of Mathematics
by John C. Sparks - AuthorHouse
The book chronologically traces the Pythagorean theorem from the beginning, through 4000 years of Pythagorean proofs. The text presents some classic puzzles, amusements, and applications. An epilogue summarizes the importance of the theorem.
(13705 views)