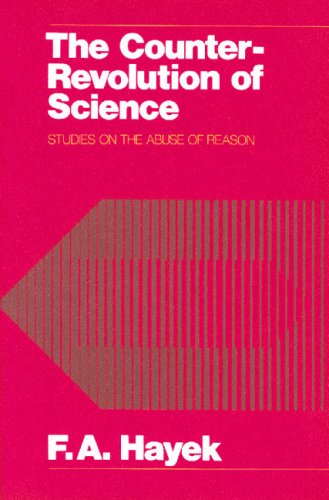 The Counter-Revolution of Science
by Friedrich A. Hayek

Description:
Early in the last century the successes of science led a group of French thinkers to apply the principles of science to the study of society. These thinkers purported to have discovered the supposed 'laws' of society and concluded that an elite of social scientists should assume direct control of social life. The Counter-Revolution of Science is Nobel Laureate Friedrich Hayek's forceful attack on this abuse of reason.

Maximizing the Impacts of Your Research: A Handbook for Social Scientists
- LSE Public Policy Group
This Handbook opens the door to researchers achieving a more focused approach to their research. It provides sound advice and guidance on how to ensure that your work achieves its maximum visibility with both academic and external audiences.
(8243 views)

On the Dual Uses of Science and Ethics
by Brian Rappert, Michael J. Selgelid (eds) - ANU Press
Claims about the transformations enabled by modern science and medicine have been accompanied by an unsettling question in recent years: might the knowledge being produced undermine -- rather than further -- human and animal well being?
(5494 views)

Forced Migration and Mortality
- National Academies Press
The book examines mortality patterns in complex humanitarian emergencies, reviewing the state of knowledge, as well as how patterns may change in the new century. It contains four case studies of mortality in recent emergencies ...
(5026 views)

Conducting Research Surveys via E-mail and the Web
by M. Schonlau, R.D. Fricker, M.N. Elliott - Rand Publishing
Internet-based surveys, although still in their infancy, are becoming increasingly popular because they are believed to be faster, better, cheaper, and easier to conduct than surveys using more-traditional telephone or mail methods.
(8846 views)