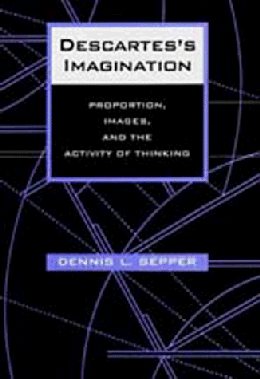 Descartes's Imagination: Proportion, Images, and the Activity of Thinking
by Dennis L. Sepper

Description:
Rene Descartes is commonly portrayed as a strict rationalist, a philosopher who theorized a radical, unresolvable split between mind and body. In this long-overdue examination of the role of imagination in Descartes's thought, Dennis Sepper reveals a Descartes quite different from the usual dualistic portrayals and offers a critical reconception of the genesis and nature of the philosopher's thought. In a vigorous analysis of the less-known early works, Sepper finds that initially Descartes assigned the imagination a central role in the mind's activity.

Modelling Rationality... and Beyond the Physics
by Gh. C. Dinulescu-Campina - American Research Press
The author is convinced that the Platonic theory of reminiscence is not a mere speculation, and the meaning of the spirit of science is the expression of a natural phenomenon which in the sense of the MESER concept is called revelation.
(15135 views)

The Science of Right
by Immanuel Kant
The Science of Right has for its object the principles of all the laws which it is possible to promulgate by external legislation. Where there is such a legislation, it becomes, in actual application to it, a system of positive right and law.
(8677 views)

Natural Philosophy
by Wilhelm Ostwald - Henry Holt and Co.
This book is meant to serve as the first aid and guide in the acquisition of comprehensive notions of the external world and the inner life. It is meant to uphold the scientific method, which takes its problems from experience and for experience.
(6765 views)

The Limits Of Science
by Nicholas Rescher - University of Pittsburgh Press
Perfected science is but an idealization that provides a useful contrast to highlight the limited character of what we do and can attain. Rescher's discussion focuses on the question: what are the theoretical limits on science?
(12873 views)