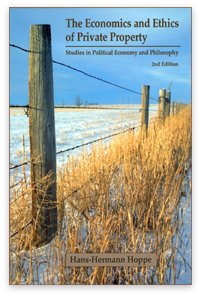 The Economics and Ethics of Private Property
by Hans-Hermann Hoppe

Description:
"Do not steal" is an excellent principle of ethics; it is also the first principle of sound economic systems. The topics covered by Hoppe are wide ranging: employment, interest, money, banking, trade cycles, taxes, public goods, war, imperialism, and the rise and fall of civilizations. The core theoretical insight uniting the entire discussion is as consistently applied here as it is neglected by the economic mainstream: the absolute inviolability of private property as a human right as the basis of continuous economic progress.

Economic Fables
by Ariel Rubinstein - Open Book Publishers
Part memoir, part crash-course in economic theory, this deeply engaging book by one of the world's foremost economists looks at economic ideas through a personal lens. Rubinstein challenges many of the central tenets of game theory.
(3545 views)

Industrial Organization, a Contract Based approach
by Nicolas Boccard - Lulu.com
The book offers an extensive and up-to-date panorama of Industrial Organization aimed at advanced undergraduates. The analysis of market interactions, business strategies and public policy is performed using the now standard framework of game theory.
(7121 views)

The Pure Theory of Capital
by Friedrich A. Hayek - Ludwig von Mises Institute
The greatest failing of non-Austrians theories of macroeconomics is that they lack a robust theory of capital. F.A. Hayek sought to fill out the theory of the business cycle with an impenetrable one, and the result was this remarkable 1941 treatise.
(12065 views)

Making Economic Sense
by Murray N. Rothbard - Ludwig Von Mises Institute
The goal of this hefty tome by this master economist is to communicate with the public about economic theory and policy, in the form of articles. No economist has ever written so clearly about subjects usually wrapped in mystery.
(11862 views)