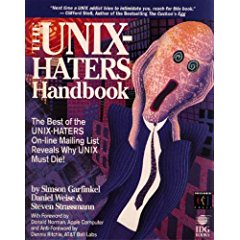 Description:
In the tradition of 12-step programs that help people overcome their addictions by sharing stories, The UNIX-Haters Handbook is the self-help guide for people affected by the world's most esoteric and most widely used operating system. Turn here for answers to all-important questions, such as... Why does the online documentation lie to us? Why does the operating system overwrite valuable files with garbage? Why does the user's guide bear no relationship to reality? Why do the commands have cryptic names that have no bearing on their function? What is a grep? What is vi? Do troffs live under bridges, or are they inverted trons? WHERE ARE THEY SENDING ALL THE UPPERCASE LETTERS?

GNU Bash Reference Manual
by Chet Ramey, Brian Fox - Network Theory Ltd.
A description of the features that are present in the Bash shell. GNU Bash is an implementation of the POSIX.2 specification, with additional features from the C-shell and Korn shell. Most Bourne shell scripts can be run by Bash without modification.
(8782 views)

Guide to Unix
- Wikibooks
This book is a guide to Unix and Unix-like operating systems, such as GNU/Linux and *BSD. The book targets Unix or non-Unix users seeking background, Unix system users, and Unix system administrators (background and administrator instructions).
(6818 views)