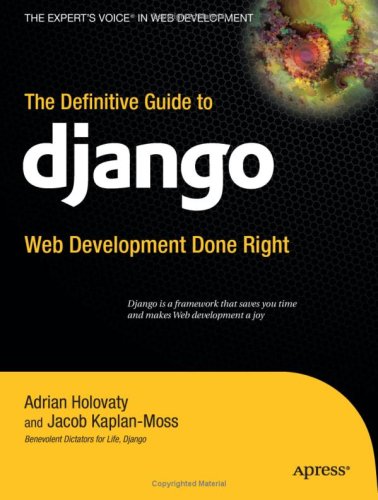 The Definitive Guide to Django
by A. Holovaty, J. Kaplan-Moss

Description:
Django is the Python–based equivalent to the Ruby on Rails web development framework. The authors show you how they use this framework to create award–winning web sites. This is the first edition of the Django Book. It covers 0.96, which is different than the most recent version of Django, 1.0.

Data Structures and Algorithms with Object-Oriented Design Patterns in Python
by Bruno R. Preiss
The primary goal of this book is to promote object-oriented design using Python and to illustrate the use of the emerging object-oriented design patterns. The book shows how these patterns are used to create good software designs.
(20771 views)

20 Python Libraries You Aren't Using
by Caleb Hattingh - O'Reilly Media
This report helps you explore some of the lesser known Python libraries and tools that deserve more attention. Hattingh diligently spent time finding and testing hidden gems that are easy to install and use, cross-platform, and not yet popular.
(5126 views)

Python Cookbook
by David Beazley, Brian K. Jones - O'Reilly Media
This cookbook is for experienced Python programmers who want to focus on modern tools and idioms. You'll find complete recipes for more than a dozen topics, covering the core Python language as well as tasks common to a wide variety of applications.
(12921 views)

Python course in Bioinformatics
by Katja Schuerer, Catherine Letondal - Pasteur Institute
This course is designed for biologists who already have some programming knowledge in other languages. The focus is on biological examples that are used throughout the course, as well as the suggested exercises drawn from the field of biology.
(19395 views)