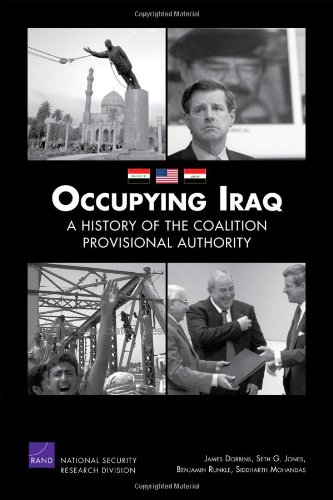 Occupying Iraq: A History of the Coalition Provisional Authority
by James Dobbin

Description:
The American engagement in Iraq has been looked at from many perspectives — the flawed intelligence that provided the war's rationale, the failed effort to secure an international mandate, the rapid success of the invasion, and the long ensuing counterinsurgency campaign. This book focuses on the activities of the Coalition Provisional Authority and its administrator. It is based on interviews with many of those responsible for setting and implementing occupation policy.

Understanding Iran
by Jerrod D. Green - RAND Corporation
A handbook for U.S. Policymakers interested in understanding the Islamic Republic of Iran. It synthesizes existing analyses on Iran and draws from non-American experts with a different interpretive lens for viewing the seemingly opaque Iranian system.
(11736 views)

Villehardouin and de Joinville: Memoirs of the Crusades
by Geoffroi de Villehardouin - Dutton
Written by eye-witnesses who had taken an important part in what they describe. Stirring episodes in one of the most stirring chapters in human history. How Christendom put forth its power to capture and again recapture the holy land.
(14256 views)

Afghanistan: The Soviet Invasion and the Afghan Response, 1979-1982
by Mohammed Kakar - University of California Press
Every ninth Afghan had died, every seventh has been disabled, every third had fled abroad: this book reveals the true horror of this unfortunate conflict. The author is an Afghan historian who has studied Afghan society, culture, and politics.
(12416 views)

A History of the Babylonians and Assyrians
by George Stephen Goodspeed - Scribner
As an introduction to the ancient history of Iraq, this book has stood the test of time. The reader is given a detailed history of the Old Babylonian, Assyrian, and Neo-Babylonian Empires. The book is consistently cited as a helpful introduction...
(6785 views)