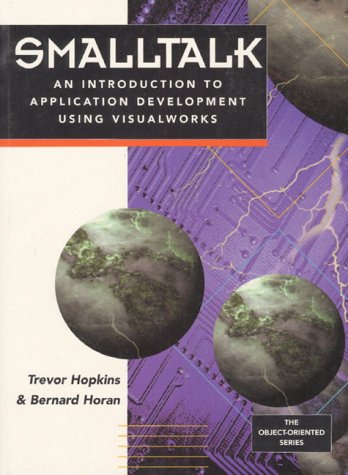 Description:
This is an introduction for students who want to start constructing prototype applications in Smalltalk-80, but who don't want a detailed guide to the implementation. Requiring no previous exposure to Smalltalk-80 or object-oriented programming in general, the text offers a tutorial approach, with a large number of short chapters, each covering specific points.

A Taste of Smalltalk
by Ted Kaehler, Dave Patterson - W W Norton & Co Inc
This tutorial gives you a taste of programming in the Smalltalk-80 language and environment. Our approach is to guide you through several versions of a small program in a short time. The book is just a 'taste', not a reference manual.
(11529 views)

Smalltalk/V: Tutorial and Programming Handbook
- Digitalk, Inc
Smalltalk is both a powerful language -- you can get a lot of activity out of a few lines of code -- and a powerful program development environment. This book is intended for both beginners as well as experienced Smalltalk programmers.
(11732 views)

Inside Smalltalk
by W. R. Lalonde, J. R. Pugh - Prentice-Hall
An intro to the object-oriented programming language Smalltalk-80, with an emphasis on classes, subclassing, inheritance and message passing. The SmallTalk language is fully explained as well as the class library and programming environment.
(10797 views)

Smalltalk-80: The Interactive Programming Environment
by Adele Goldberg - Addison-Wesley
This book is an introduction to the user interface of the Smalltalk-80 system, an illustrated description of how to explore the class descriptions available in the system, how to use the editors for implementing new class descriptions, etc.
(15670 views)