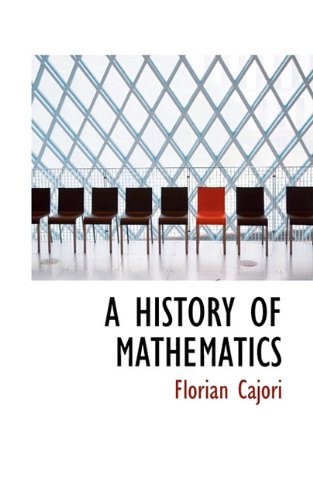 A History of Mathematics
by Florian Cajori

History of Modern Mathematics
by David Eugene Smith - Columbia University
This is an outline of the prominent movements in mathematics, presenting a few of the leading names, and calling attention to some of the bibliography of the subject. In these pages the term Mathematics will be limited to the domain of pure science.
(14513 views)

A Short History of Greek Mathematics
by James Gow - Cambridge University Press
Students and Greek scholars will encounter a chronicle of the development of mathematics, including the decimal scale; Egyptian and Greek arithmetic; theory of numbers; Greek geometry; Egyptian geometry; Euclid, Archimedes, and their successors ...
(7340 views)

The Story of Euclid
by W. B. Frankland - George Newnes
Euclid was a Greek mathematician, often referred to as the 'Father of Geometry'. His Elements is one of the most influential works in the history of mathematics, serving as the main textbook for teaching mathematics until the early 20th century.
(12618 views)