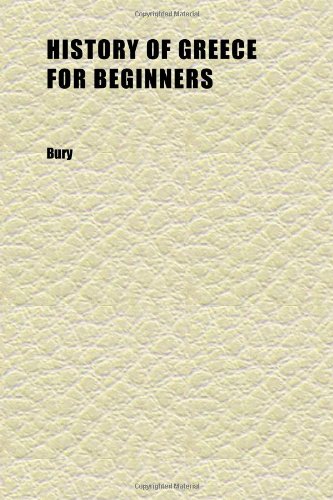 History of Greece for Beginners
by J. B. Bury

Description:
Contents: Beginnings of Greece and the heroic age; Expansion of Greece; Growth of Sparta; Union of Attica and the foundation of the Athenian democracy; Advance of Persia to the Aegean; Persian and Punic invasions; Foundation of the Athenian empire; Pericles; War of Athens with the Peloponnesians; Decline and downfall of the Athenian empire; Spartan supremacy and the Persian war; Revival of Athens and her second league; Hegemony of Thebes; Rise of Macedonia; Conquest of Persia; Conquest of the far east.

Initiation into the Mysteries of the Ancient World
by Jan N. Bremmer - De Gruyter Open
This book explores ancient mystery cults and their influence on emerging Christianity. The author discusses the famous Eleusian Mysteries as well as lesser-known Greek and Roman mysteries, offering an in-depth analysis of this fascinating phenomenon.
(5279 views)

Alexander the Great
by Jacob Abbott - Harper & Brothers
Alexander the Great created one of the largest empires in ancient history. The cultural impact of his conquests lasted for centuries. Alexander is is remembered for his tactical ability and for spreading Greek civilization into the East.
(12443 views)