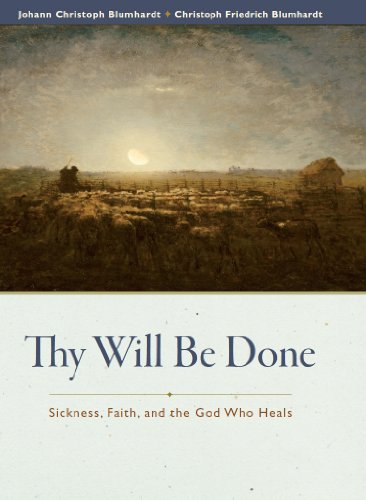 Thy Will Be Done: Sickness, Faith, and the God Who Heals
by J. C. Blumhardt, C. F. Blumhardt

Description:
With childlike confidence in the possibility of miracles and a deep trust that the Creator is supremely wise and good, the Blumhardts point us away from our woes and to Jesus. As the Great Physician, he offers lasting comfort and healing without cost.

UFOs, Ghosts, and a Rising God: Debunking the Resurrection of Jesus
by Chris Hallquist
At the dawn of the 21st century, interest in the origins of Christianity is as strong as ever. Hallquist examines what investigations of similar upstart cults have revealed and applies these revelations to the origins of the world's largest religion.
(3170 views)

Studies of the Gods in Greece at Certain Sanctuaries Recently Excavated
by Louis Dyer - MacMillan
Eight lectures given in 1890 at the Lowell Institute: introduction; Demeter at Eleusis and Cnidus; Dionysus in Thrace and Old Attica; Dionysus at Athens; gods at Eleusis; Aesculapius at Epidaurus and Athens; Aphrodite at Paphos; Apollo at Delos.
(15290 views)

No Sense of Obligation: Science and Religion in an Impersonal Universe
by Matt Young - FirstBooks Library
A tour de force of science and religion, reason and faith, denoting in clear and unmistakable language and rhetoric what science really reveals about the cosmos, the world, and ourselves. Challenge to the believer and the nonbeliever alike.
(7841 views)

People Who Don't Know They're Dead
by Gary Leon Hill - Booktrope
Gary Leon Hill tells a story of how his uncle and aunt came to counsel dead spirits who took up residence in bodies that didn't belong to them. Hill elucidates much of what we know about life, death, consciousness, and the meaning of the universe.
(10703 views)