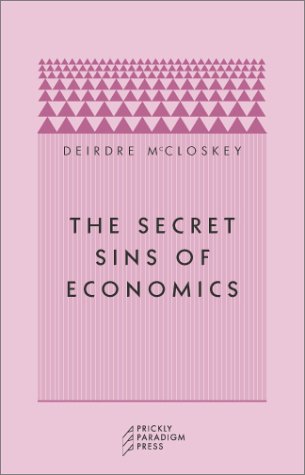 The Secret Sins of Economics
by Deirdre McCloskey

Description:
In this pamphlet, McCloskey reveals what she sees as the secret sins of economics (there are two) that no one will discuss. In her view, these sins cripple economics as a scientific enterprise. She writes with passion and an unusually wide scope.

Modeling Bounded Rationality
by Ariel Rubinstein - The MIT Press
The author considers the modeling of choice, the modeling of procedural rationality, knowledge, memory, the choice of what to know, and group decisions. The second part discusses the fundamental difficulties of modeling bounded rationality in games.
(9987 views)

The Pure Theory of Capital
by Friedrich A. Hayek - Ludwig von Mises Institute
The greatest failing of non-Austrians theories of macroeconomics is that they lack a robust theory of capital. F.A. Hayek sought to fill out the theory of the business cycle with an impenetrable one, and the result was this remarkable 1941 treatise.
(12478 views)

Capital and Its Structure
by Ludwig Lachmann - Ludwig von Mises Institute
A robust theory of capital that incorporates an Austrian understanding of the business cycle and the market process. This book remains a seminal study written while the author was at the height of his intellectual powers.
(10917 views)