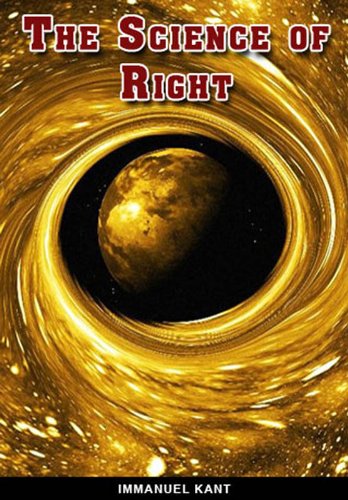 The Science of Right
by Immanuel Kant

Description:
The Science of Right has for its object the principles of all the laws which it is possible to promulgate by external legislation. Where there is such a legislation, it becomes, in actual application to it, a system of positive right and law; and he who is versed in the knowledge of this system is called a jurist or jurisconsult (jurisconsultus).

Nature Mysticism
by J. Edward Mercer - George Allen & Co
The subject of this book is Nature Mysticism. The phenomena of nature are to be studied in their mystical aspects. The wide term Mysticism is used because in spite of many misleading associations it is hard to replace.
(13214 views)

Telemorphosis: Theory in the Era of Climate Change
by Tom Cohen (ed.) - MPublishing
This volume gathers notable philosophers to engage the predominant impasse of an emerging era of climate change and ecocatastrophic acceleration: that is, how critical practices inherited from 20th century thinkers alter at the current moment.
(7190 views)

The Complete Plato
by Plato - Feedbooks
Plato was a Greek philosopher and mathematician of the Classic Age who founded the Academy of Athens. He has distinguished himself as one of the founders of Western philosophy by recording the teachings of his master and his own philosophies.
(12284 views)

The Complete Aristotle
by Aristotle - Feedbooks
Aristotle was a Greek philosopher who changed the course of Western philosophy. He has gone down in history as one of the greatest philosophers of all time. This collection of works has been adapted from the collection of The University of Adelaide.
(12622 views)