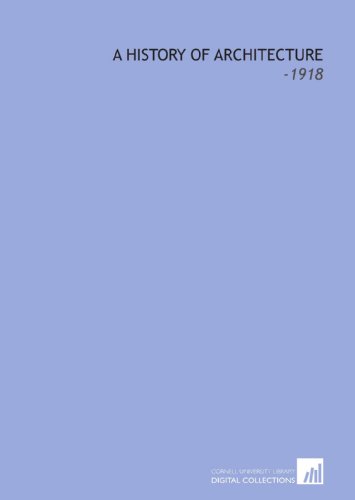 A History of Architecture
by F. Kimball, G.H. Edgell

Description:
The attempt has been made to present each style as a thing of growth and change, rather than as a formula based on the monuments of some supposed apogee, with respect to which the later forms have too often been treated as corrupt.

Cathedral Cities of Spain: 60 reproductions from original water colours
by W. W. Collins
Probably the most interesting moments of the trip abroad by the architectural students are those spent in sketching bits of interest in water color. Nothing is so helpful, so reminiscent as these same notes of color when viewed in alter years.
(14066 views)

The Picturesque Antiquities of Spain
by Nathaniel Armstrong Wells - Project Gutenberg
Some accounts of the author's travels in Spain. Described in a series of letters, with illustrations, representing moorish palaces, cathedrals, and other monuments of art, contained in the cities of Burgos, Valladolid, Toledo and Seville.
(10021 views)

Cities Full of Symbols: A Theory of Urban Space and Culture
by Peter J. M. Nas (ed.) - Leiden University Press
The book develops urban symbolic ecology and hypercity approaches into a new perspective on social cohesion. Architects, sociologists and historians converge to make this a book for anyone interested in urban life, policymaking and city branding.
(8251 views)