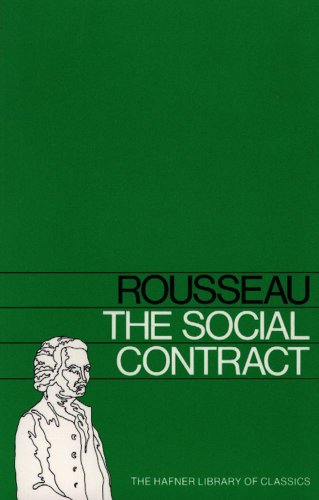 The Social Contract
by Jean-Jacques Rousseau

Description:
Rousseau's influential 1762 work, in which he argues that all government is fundamentally flawed and that modern society is based on a system of inequality. The philosopher proposes an alternative system for the development of self-governing, self-disciplined citizens.

Who Will Be the Next President?
by Alexander S. Belenky - Springer
This book addresses the peculiarities of the current presidential election system. It argues that any rules for electing a President that may replace the current ones should provide an equal representation of states as equal members of the Union ...
(4206 views)

The Dropping of the Atomic Bomb: Truman's True Intentions
by Dominick Abel Severance - Christendom College
Truman’s true intention was to use the destruction of a Japanese city to shock the world and manipulate the horror and destructive power of the bomb to create fear in the international community to ensure the security of American political interests.
(16090 views)

The End of Loser Liberalism: Making Markets Progressive
by Dean Baker - Center for Economic and Policy Research
Progressives need a fundamentally new approach to politics. They have been losing not just because conservatives have so much more money and power, but also because they have accepted the conservatives' framing of political debates...
(6795 views)

Healing Our World: The Other Piece of the Puzzle
by Mary J., Ph.D. Ruwart - Sunstar Press
Dr. Ruwart explains with simple examples how all of our good intentions with legislation end up hurting us all instead of solving society's problems. A must read if you want to understand how we got into this mess and how we can get out of it.
(10382 views)