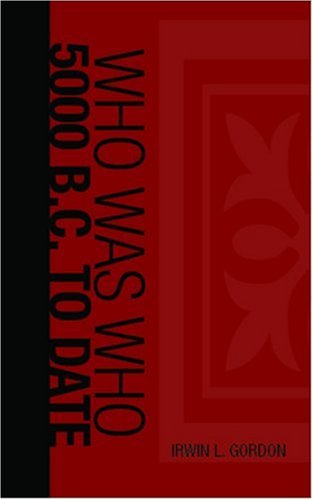 Description:
Who Was Who by Irwin L. Gordon contains over 500 biographies of those who did or endeavored to become famous. This is a wry and quirky humorous dictionary of personages in history whether of biblical, religious, and/or secular bent.

David Livingstone
by C. Silvester Horne - Macmillan and co.
The author has aimed not so much at telling the story as at allowing the story to tell itself. It may be added that, in the belief of the writer, Livingstone is greatest, not as a scientist, nor an explorer, but as a man and a missionary.
(2930 views)

Lives of the Noble Grecians and Romans
by Plutarch
A brilliant social history of the ancient world by one of the greatest biographers of all time. In his most famous and influential work, Plutarch reveals the character and personality of his subjects and how they led ultimately to tragedy or victory.
(12581 views)

The Life of Christopher Columbus
by Edward Everett Hale - Classic Reader
This book contains a life of Columbus, written with the hope of interesting all classes of readers. I have followed on the lines of his own personal narrative wherever we have it. And where this is lost I have used the contemporary authorities.
(13249 views)