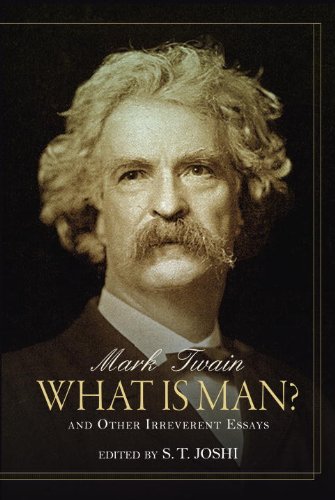 What is Man?
by Mark Twain

Description:
This unique collection assembles writings in which Twain views the multifarious claims of religion -- metaphysical, moral, and political -- with a skeptical eye. The centerpiece of the book is the long philosophical dialogue, What Is Man?

The Mysterious Stranger
by Mark Twain - Project Gutenberg
The book belies the popular image of the affable American humorist. In this tale, Twain denies the existence of a benign Providence, a soul, an afterlife, and even reality itself. As the Stranger in the story asserts, nothing exists; all is a dream.
(9583 views)

A Connecticut Yankee in King Arthur's Court
by Mark Twain - Charles L. Webster & Co.
Satirical novel by Mark Twain, the tale of a commonsensical Yankee who is carried back in time to Britain in the Dark Ages, and it celebrates homespun ingenuity and democratic values in contrast to the superstitious ineptitude of a feudal monarchy.
(8312 views)

The Adventures of Tom Sawyer
by Mark Twain - The American Publishing Company
Tom Sawyer is in a series of adventures along the banks of the Mississippi, and he usually manages to come out on top. The novel raises some questions about identity, and about attitudes to class and race. This book engages readers of all ages.
(14853 views)