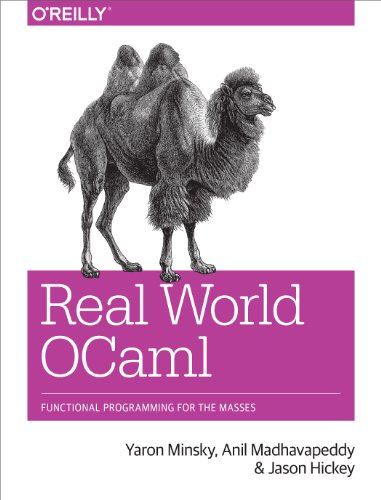 Description:
This fast-moving tutorial introduces you to OCaml, an industrial-strength programming language designed for expressiveness, safety, and speed. Through the book's many examples, you'll quickly learn how OCaml stands out as a tool for writing fast, succinct, and readable systems code.

Using, Understanding, and Unraveling The OCaml Language
by Didier Rémy - INRIA Paris-Rocquencourt
These notes are addressed to a wide audience of people interested in modern programming languages in general, ML-like languages in particular, or simply in OCaml, whether they are programmers or language designers, beginners or knowledgeable readers.
(8702 views)

Think OCaml
by Nicholas Monje, Allen Downey - Green Tea Press
An introductory programming textbook based on the OCaml language. It is intended for newcomers and also those who know some programming but want to learn programming in the function-oriented paradigm, or those who simply want to learn OCaml.
(7218 views)

Unix System Programming in OCaml
by Xavier Leroy, Didier Remy
This document is an introductory course on Unix system programming, with an emphasis on communications between processes. The main novelty of this work is the use of the OCaml language, a dialect of the ML language, instead of the C language.
(8898 views)

Functional Programming in OCaml
by Michael R. Clarkson, et al. - Cornell University
This course is about making you a better programmer. This course gives you the opportunity to now learn a new language from scratch and reflect along the way about the difference between programming and programming in a language.
(2909 views)