Mariner Mission to Venus
- Jet Propulsion Laboratory , 1963
The book describes one phase of the U.S. civilian space program -- the journey of the Mariner spacecraft to the vicinity of Venus and beyond. It reports upon the measurements taken during the 'flyby' on December 14, 1962, 36,000,000 miles from Earth.
(1890 views)

Unlimited Horizons: Design and Development of the U-2
by Peter W. Merlin - NASA , 2015
Over the span of six decades, the U-2 evolved from a relatively basic, high-altitude camera platform for performing clandestine reconnaissance missions into a multisensor platform that has been adapted for a multitude of civil and military roles.
(3436 views)

Flying Beyond the Stall
by Douglas A. Joyce - NASA , 2014
The X-31 was unique in the world of experimental or X-airplanes. It was the only X-plane that was designed, manufactured, and tested as an international effort; a joint effort of the United States and Germany. It supported two separate test programs.
(3020 views)

Hubble's Legacy
by Roger D. Launius, David DeVorkin - Smithsonian Institution Scholarly Press , 2014
The development and operation of the Hubble Space Telescope (HST) have resulted in many rich legacies, most particularly in science and technology -- but in culture as well. This book is meant to capture the history of this iconic instrument.
(2840 views)

Apollo 17 Lunar Surface Journal
by Eric M. Jones - NASA , 1995
Sending humans to the Moon was arguably the most difficult technological undertaking in all of history. For sure, the best of America's scientists and engineers were taxed to the limit in order to accomplish nine manned flights to the Moon...
(3881 views)

Humans to Mars: Fifty Years of Mission Planning, 1950-2000
by David S. F. Portree - NASA History Division , 2001
By examining the evolution of 50 mission studies over the past 50 years, David Portree gives us a sense of the many options that Mars human space flight planners have explored. Portree covers a wide variety of ideas for human exploration of Mars...
(4779 views)

The Future of Remote Sensing From Space
- U.S. Congress, Office of Technology Assessment , 1993
This report examines issues related to the development and operation of publicly funded U.S. and foreign civilian remote sensing systems. It also explores the military and intelligence use of data gathered by civilian satellites.
(3323 views)

Coming Home: Reentry and Recovery from Space
by Roger D. Launius, Dennis R. Jenkins - NASA , 2012
Returning to Earth after a flight into space is a challenge, and contributions from the NASA in aerodynamics, thermal protection, control, stability, propulsion, and landing systems have proven critical to the success of the human space flight.
(4177 views)

Dressing for Altitude
by Dennis R. Jenkins - NASA , 2012
Anybody who has watched many movies or television shows has seen them -- the ubiquitous silver suits worn by pilots as they explore the unknown. They are called pressure suits, and one can trace their lineage to Wiley Post or, a bit earlier.
(3513 views)

Breaking the Mishap Chain
by P.W. Merlin, G.A. Bendrick, D.A. Holland - NASA , 2012
This volume contains a collection of case studies of mishaps involving aerospace vehicles and spacecraft in which human factors played a significant role. It is offered as a learning tool so that future programs do not repeat the mistakes.
(5129 views)

Rockets and People, Volume 3: Hot Days of the Cold War
by Boris Chertok - NASA History Series , 2009
Chertok devotes a significant portion of the volume to the early years of Soviet human space flight in the early 1960's. These include a chapter on the Vostok and Voskhod programs, which left an indelible mark on early years of the 'space race'.
(5529 views)

Rockets and People, Volume 1
by Boris Chertok - NASA History Series , 2005
Volume 1 of the memoirs of academician Boris Chertok, translated from the original Russian. Describes his early years as an engineer and ends with the mission to Germany after the end of WWII when the Soviets captured Nazi missile technology.
(3963 views)

Rockets and People: Volume IV: The Moon Race
by Boris Chertok - NASA , 2012
In this volume the famous spacecraft designer Boris Chertok, who worked under Sergey Korolev, continues his fascinating narrative on the Soviet space program, this time covering 1968 to 1974, the peak years of the Soviet human lunar program.
(5739 views)

Psychology of Space Exploration
by Douglas A. Vakoch - NASA , 2011
Contemporary research in historical perspective. This e-book explores some of the contributions of psychology to yesterday's great space race, today's orbiter and International Space Station missions, and tomorrow's journeys beyond Earth's orbit.
(6831 views)

From Stargazers to Starships
by David P. Stern - phy6.org , 2008
A coherent, self-contained course at the high-school level, also suitable for independent study, rich in history. It deals with the world of gravity -- of massive planets and stars, and the way spaceflight is achieved despite their strong pull.
(4989 views)

Basics of Space Flight
by Dave Doody - NASA , 2009
This tutorial is designed to help operations people identify the range of concepts associated with deep space missions, and grasp the relationships among them. It also enjoys popularity with people interested in interplanetary space flight.
(19311 views)

Apollo by the Numbers: A Statistical Reference
by Richard W. Orloff - NASA History Division , 2004
With the passage of time there are opportunities to reconsider Project Apollo anew. This book draws out the statistical information about each of the flights that have been long buried in numerous technical memoranda and historical studies.
(12273 views)

The Apollo Spacecraft: A Chronology
by Ivan D. Ertel, at al. - NASA , 2007
The chronology of the Apollo spacecraft and the lunar mission provides documented information covering a wide range of happenings directly and indirectly related to the program. Written for historians and others interested in the great adventure.
(12871 views)

Orders of Magnitude: A History of the NACA and NASA, 1915-1990
by Roger E. Bilstein - United States Government Printing , 1989
This is a concise history of NACA and its successor agency, NASA. This edition not only updates the historical record, but restores aeronautics to its due place in the history of the agency and of mankind's most fascinating and continuing voyage.
(12302 views)

Resources of Near-Earth Space
by J. S. Lewis, M. S. Matthews - University of Arizona Press , 1993
Parts of the solar system that are most accessible from Earth are rich in materials of great potential value. Immediate uses of these resources to manufacture propellants, metals, and fluids can support future large-scale space activities.
(12011 views)

Spacecraft Dynamics
by Thomas R. Kane - McGraw Hill , 1983
This book is an outgrowth of courses taught at Stanford University and at UCLA. It is intended for use as a textbook in courses of instruction at the graduate level and as a reference work for engineers engaged in research in this field.
(11194 views) 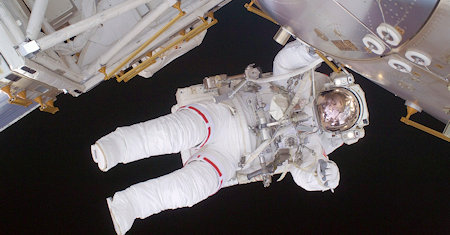