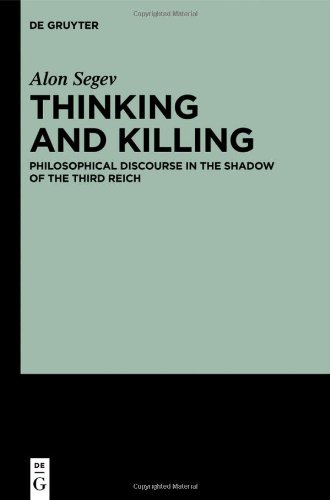 Thinking and Killing: Philosophical Discourse in the Shadow of the Third Reich
by Alon Segev

Description:
This book explores the phenomenon of the Third Reich from a philosophical perspective. It concentrates on how Nazi Germany, the Holocaust and Anti-Semitism are conceived by eight German thinkers from the Continental tradition, exposing and then exploring the tension between ideology and philosophy, between submission to authority and genuine critical thinking, which constitute the essence of the Continental philosophical tradition.

The Antichrist
by Friedrich Wilhelm Nietzsche - Alfred A. Knopf
Here is Friedrich Nietzsche's great masterpiece The Anti-Christ, wherein Nietzsche attacks Christianity as a blight on humanity. This is essential reading for anyone wishing to understand Nietzsche and his place within the history of philosophy.
(8602 views)

Can Biotechnology Abolish Suffering?
by David Pearce - Smashwords
This book is a collection of essays by utilitarian philosopher David Pearce. The essays deal with the abolition of suffering through biotechnology, negative utilitarianism, the nature of consciousness, and the future of intelligent life.
(6686 views)

Metaphysics
by Aristotle - The Internet Classics Archive
Metaphysics was regarded as 'the Queen of Sciences' even before the age of Aristotle. This multipart essay by the prominent philosopher examines the nature of existence, along with issues related to causation, form and matter, mathematics, and God.
(12493 views)