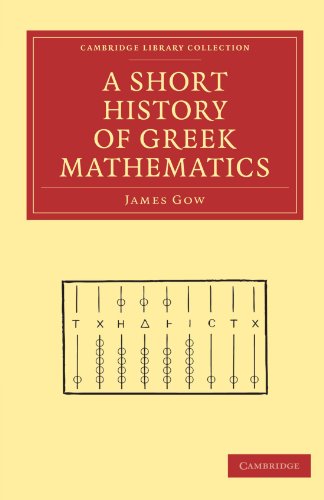 A Short History of Greek Mathematics
by James Gow

Description:
Mathematicians will find accounts of every extant Greek mathematical book and many proofs translated directly from ancient texts. Students and Greek scholars will encounter a chronicle of the development of mathematical science, including the decimal scale; Egyptian and Greek arithmetic; the Greek theory of numbers; Greek geometry; Egyptian geometry; and the works of Euclid, Archimedes, and their successors.

Lectures on the History of Mathematics
by G. Donald Allen - Texas A&M University
Exploring the concepts, ideas, and results of mathematics is a fascinating topic. In this course you will see firsthand many of the results that have made what mathematics is today and meet the mathematicians that created them.
(16364 views)

A Century of Mathematics in America
by Peter Duren, Richard A. Askey - American Mathematical Society
In 100 years the American mathematical community has grown to an influential group that sets the standard for the rest of the world. This book in three volumes depicts the political and mathematical forces that have shaped the AMS in the past century.
(17970 views)

Theory of Probability: A Historical Essay
by Oscar Sheynin - arXiv.org
This book covers the history of probability up to Kolmogorov with essential additional coverage of statistics up to Fisher. The book covers an extremely wide field, and is targeted at the same readers as any other book on history of science.
(6763 views)

A Short Account of the History of Mathematics
by W. W. Rouse Ball - Dover Publications
This is the classic resource on the history of mathematics providing a deeper understanding of the subject and how it has impacted our culture. From the early Greek influences to the middle ages and the renaissance to the end of the 19th-century.
(14916 views)