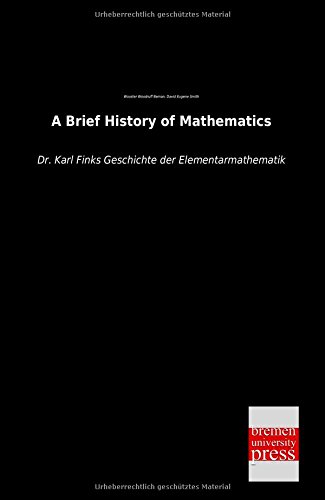 A Brief History of Mathematics
by Karl Fink

Description:
The following history of elementary mathematics is intended to give students of mathematics an historical survey of the elementary parts of this science and to furnish the teacher of the elements opportunity, with little expenditure of time, to review connectedly points for the most part long familiar to him and to utilise them in his teaching in suitable comments.

A Century of Mathematics in America
by Peter Duren, Richard A. Askey - American Mathematical Society
In 100 years the American mathematical community has grown to an influential group that sets the standard for the rest of the world. This book in three volumes depicts the political and mathematical forces that have shaped the AMS in the past century.
(14439 views)

The Pythagorean Theorem: Crown Jewel of Mathematics
by John C. Sparks - AuthorHouse
The book chronologically traces the Pythagorean theorem from the beginning, through 4000 years of Pythagorean proofs. The text presents some classic puzzles, amusements, and applications. An epilogue summarizes the importance of the theorem.
(13131 views)