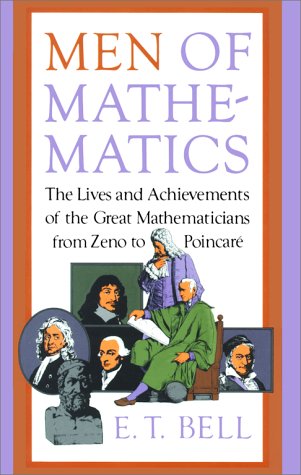 Men of Mathematics
by E.T. Bell

Description:
Nature Professor E. T. Bell has written a fascinating book. The amount of biographical details and of mathematics that he has compressed into a volume of 600 pages is extraordinary ... he carries the reader along; he whets the appetite.

A Century of Mathematics in America
by Peter Duren, Richard A. Askey - American Mathematical Society
In 100 years the American mathematical community has grown to an influential group that sets the standard for the rest of the world. This book in three volumes depicts the political and mathematical forces that have shaped the AMS in the past century.
(16479 views)

Archimedes
by Thomas Little Heath
History and tradition know Archimedes almost exclusively as the inventor of a number of ingenious mechanical appliances. Few have any acquaintance with the details of the original discoveries in mathematics of the greatest mathematician of antiquity.
(7178 views)

A Brief History of Mathematics
by Karl Fink - Open Court Publishing Company
The book is intended to give students of mathematics an historical survey of the elementary parts of this science and to furnish the teacher of the elements opportunity to review connectedly points for the most part long familiar to him.
(6133 views)