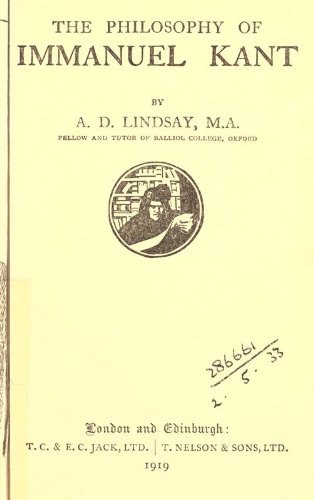 The Philosophy of Immanuel Kant
by A. D. Lindsay

Description:
All that the writer of a book like this can hope to do is to persuade others to undertake that study by interesting them in the problems with which it deals, and by offering a few suggestions which may help to an understanding of it.

Ancient Greek Philosophy
- Pearson
The philosophers of ancient Greece have fascinated thinking persons for centuries, and their writings have been the key influences on the Western civilization. The works of Plato and Aristotle have defined the questions for subsequent generations.
(4633 views)

Yorick's World: Science and the Knowing Subject
by Peter Caws - University of California Press
Peter Caws provides a fresh treatment of some of the most vexing problems in the philosophy of science: explanation, induction, causality, evolution, discovery, artificial intelligence, and the social implications of technological rationality.
(12537 views)

Arabic Thought and Its Place in History
by De Lacy O'Leary - Kegan Paul and Company
A study of the mutual influence of Arabic and Western worlds during the Middle Ages. It traces the transmission of Greek philosophy and science to the Islamic cultures. The book presents a fascinating portrait of medieval Muslim thought.
(18711 views)

Greek Thinkers: A History of Ancient Philosophy
by Theodor Gomperz - J. Murray
The Greeks loved knowledge for its own sake and delighted in free discussion of ideas and theories. Professor Gomperz in this famous book looks closely at their writings and relates them to later developments in thought and science.
(5601 views)