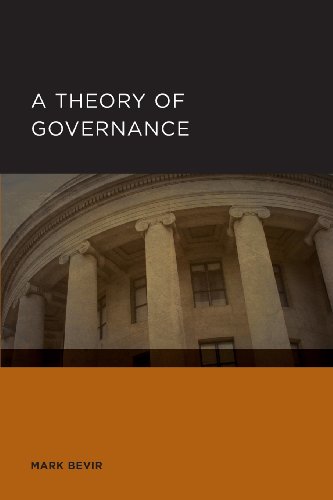 A Theory of Governance
by Mark Bevir

Description:
This book explores philosophical, sociological, and democratic approaches to organization. Bevir offers a humanist and historicist perspective, arguing that people creatively make and remake organizations in particular contexts. By highlighting the meaningful and contingent nature of action, he reexamines the concepts of state, nation, network, and market, and he calls for democratic innovations.

Data Analysis for Politics and Policy
by Edward R. Tufte - Prentice Hall
A great book for the beginning data analyst and a must for political science graduate students. It is a clear introduction to the use of regression analysis. Edward Tufte was a political scientist of the first order and a teacher par excellence.
(10080 views)

21st Century American Government and Politics
by David Paletz, Diana Owen, Timothy Cook
The text is a comprehensive introduction to the vital subject of American government and politics. It introduces the intricacies of the Constitution, the complexities of federalism, the meanings of civil liberties and the conflicts over civil rights.
(5156 views)