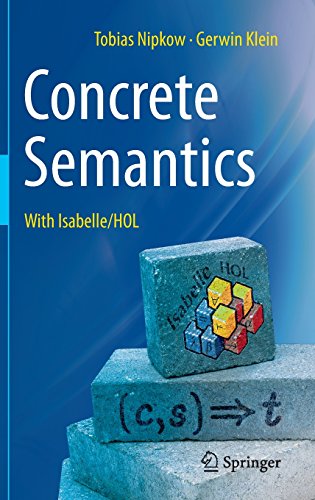 Description:
The book teaches the reader the art of precise logical reasoning and the practical use of a proof assistant as a surgical tool for formal proofs about computer science artefacts. The distinguishing feature is that all the mathematics has been formalised in Isabelle and much of it is executable.

Formal Languages
by Keijo Ruohonen - Tampere University of Technology
In these notes the classical Chomskian formal language theory is fairly fully dealt with, omitting however much of automata constructs and computability issues. Surveys of Lindenmayer system theory and the mathematical theory of codes are given.
(5221 views)

Exploring Programming Language Architecture in Perl
by Bill Hails
This book presents an informal and friendly introduction to some of the core ideas in modern computer science, using the programming language Perl as its vehicle. The book takes the form of a series of working interpreters for the language PScheme.
(12144 views)

Elements of Programming
by Alexander Stepanov, Paul McJones - Semigroup Press
This book applies the deductive method to programming by affiliating programs with the abstract mathematical theories. Specification of these theories, algorithms and theorems and lemmas describing their properties are presented together.
(1691 views)