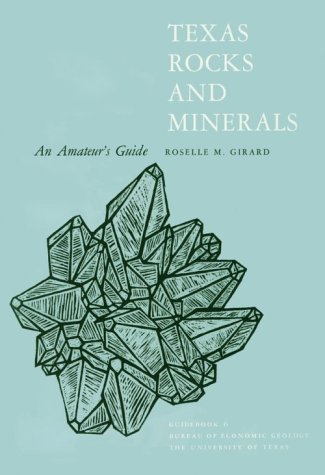 Description:
This booklet has been designed to serve as a brief, simple, nontechnical guide that will be of help to school children, amateur collectors, and others who are just beginning to develop an interest in the rocks and minerals of Texas.

The Elements of Geology: Adapted to the Use of Schools and Colleges
by Justin R. Loomis - Gould & Lincoln
In preparing the following work, it was intended to present a systematic and somewhat complete statement of the principles of Geology, within such limits that they may be thoroughly studied in the time usually allotted to this science.
(11805 views)

Minerals and Rocks
by J. Richard Wilson - BookBoon
After a brief introduction to the Rock Cycle, this text presents the properties of minerals and introduces crystallography. The most important rock-forming minerals are then dealt with in a systematic way, followed by the three main rock groups.
(13154 views)

Theory of the Earth
by Don L. Anderson - Blackwell Science Inc
Textbook on the origin, evolution, structure and composition of the Earth. It treats the pertinent aspects of solid state physics, thermodynamics, geochemistry, petrology, and seismology. A text intended for exploration geologists and researchers.
(15711 views)

Volcanoes of the United States
by Steven R. Brantley - US. Government Printing Office
The U.S. ranks third, behind Indonesia and Japan, in the number of historically active volcanoes. A few volcanoes have produced some of the largest and most dangerous types of eruptions in this century, while several others have threatened to erupt.
(3704 views)