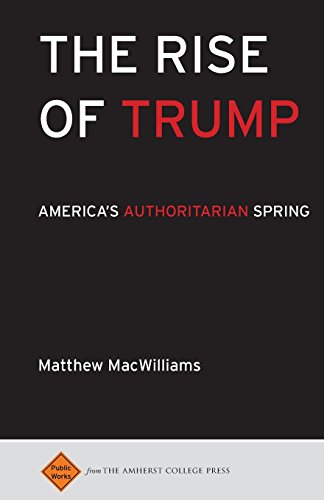 The Rise of Trump
by Matthew C. MacWilliams

Description:
The ascendance of Donald Trump to the presidential candidacy of the Republican Party has been both remarkable and, to most commentators, unlikely. In The Rise of Trump: America's Authoritarian Spring, Matthew MacWilliams argues that Trump's rapid rise through a bewildered Republican Party hierarchy is no anomaly...

U.S. Immigration Policy
by J. Bush, T. F. McLarty III, E. Alden - Council on Foreign Relations
This report examines immigration into the U.S. in a foreign policy context. It broadens the debate by analyzing issues of economic competitiveness, terrorism and national security, human rights, and public diplomacy in the context of globalization.
(12389 views)

Vote Your Ass Off
by Bradley Bright - Smashwords
This is a humorous, tongue-in-cheek, hard-hitting commentary of political facts delivered in a comedic viewpoint to the masses. Today we are fighting a war for freedom from those who want to form a bigger government to control more of our lives.
(11213 views)

The Conservative Nanny State
by Dean Baker - ManyBooks
Economist Dean Baker debunks the myth that conservatives favor the market over government intervention. In fact, conservatives rely on a range of 'nanny state' policies that ensure the rich get richer while leaving most Americans worse off.
(6719 views)

Where Have All the Emails Gone?
by David Gewirtz - ZATZ Publishing
Are you a conspiracy theorist? If you are, then this book is for you! Author David Gewirtz, has done an outstanding job of writing a book that offers insight into the White House security flaws that led to the recent missing of millions e-mails.
(7608 views)