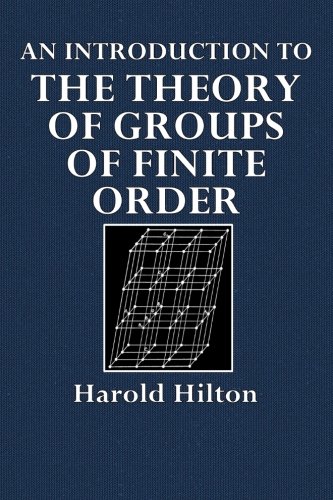 Description:
This book aims at introducing the reader to more advanced treatises and original papers on Groups of finite order. The subject requires for its study only an elementary knowledge of Algebra (especially Theory of Numbers), but the average student may nevertheless find the many excellent existing treatises rather stiff reading. I have tried to lighten for him the initial difficulties, and to show that even the most recent developments of pure Mathematics are not necessarily beyond the reach of the ordinary mathematical reader.

An Elementary Introduction to Group Theory
by M. E. Charkani - AMS
The theory of groups is a branch of mathematics in which we study the concept of binaryoperations. Group theory has many applications in physics and chemistry, and is potentially applicable in any situation characterized by symmetry.
(5001 views)

Elements of Group Theory
by F. J. Yndurain - arXiv
The following notes are the basis for a graduate course. They are oriented towards the application of group theory to particle physics, although some of it can be used for general quantum mechanics. They have no pretense of mathematical rigor.
(15016 views)

Galois Groups and Fundamental Groups
by David Meredith - San Francisco State University
This course brings together two areas of mathematics that each concern symmetry -- symmetry in algebra, in the case of Galois theory; and symmetry in geometry, in the case of fundamental groups. Prerequisites are courses in algebra and analysis.
(9800 views)

Galois Groups and Fundamental Groups
by Leila Schneps - Cambridge University Press
This book contains eight articles which focus on presenting recently developed new aspects of the theory of Galois groups and fundamental groups, avoiding classical aspects which have already been developed at length in the standard literature.
(12296 views)