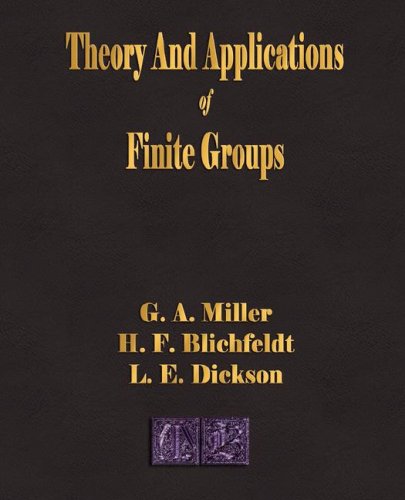 Description:
The aim of this book is to present in a unified manner the more fundamental aspects of finite groups and their applications, and at the same time to preserve the advantage which arises when each branch of an extensive subject is written by one who has long specialized in that branch.

Groups and Semigroups: Connections and Contrasts
by John Meakin - University of Nebraska-Lincoln
In the present paper, I will discuss some of these connections between group theory and semigroup theory, and I will also discuss some rather surprising contrasts between the theories. I will focus primarily on the theory of inverse semigroups.
(8219 views)

Group Characters, Symmetric Functions, and the Hecke Algebra
by David M. Goldschmidt - American Mathematical Society
The book covers a set of interrelated topics, presenting a self-contained exposition of the algebra behind the Jones polynomial along with various excursions into related areas. Directed at graduate students and mathematicians.
(10670 views)

Groups as Graphs
by W. B. V. Kandasamy, F. Smarandache - CuArt
In this book, for the first time, the authors represented every finite group in the form of a graph. This study is significant because properties of groups can be immediately obtained by looking at the graphs of the groups.
(11135 views)