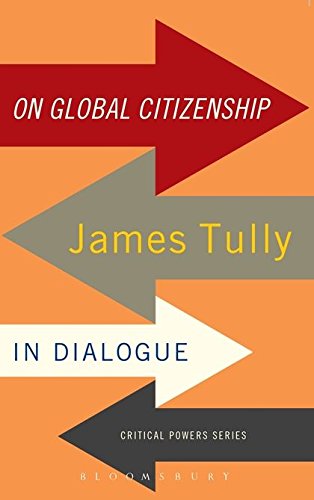 On Global Citizenship
by James Tully

Description:
On Global Citizenship develops James Tully's distinctive and influential approach to political philosophy, first outlined in his 2008 two-volume work Public Philosophy in a New Key, and applies it to the field of citizenship. The second part of the book contains responses from influential interlocutors including Bonnie Honig and Marc Stears, David Owen and Adam Dunn, Aletta Norval, Antony Laden, and Duncan Bell. These provide a commentary not just on the ideas contained in this volume, but on Tully's approach to political philosophy more generally, thus making the book an ideal first source for academics and students wishing to engage with Tully's work.

The Anti-Capitalistic Mentality
by Ludwig Von Mises - Libertarian Press
The author searches for the roots of the common anti-capitalist bias. What makes so many people unhappy in the private property order? In such a system, the failures need a scapegoat. People whose ambitions have not been satisfied blame the system.
(16480 views)

Liberty and Democracy
by Tibor R. Machan - Hoover Institution Press
In this book, contributors grapple with issue of the role of democracy in a society that is committed to respecting the individual rights of all. They challenge conventional thinking, offering provocative ideas on democracy and individual freedom.
(9404 views)

Controlling Bureaucracies: Dilemmas in Democratic Governance
by Judith Gruber - University of California Press
How can citizens exercise control over government officials in ways that allow for effective government? In this book, Professor Gruber merges a sophisticated analysis with empirical research to develop a new approach to this perennial problem.
(10437 views)

Corruption and Anti-Corruption
by Peter Larmour, Nick Wolanin - Asia Pacific Press
The book deals with the international dimensions of corruption, including campaigns to recover assets of former dictators, and the links between corruption, transnational and economic crime. It deals with corruption as an issue in political theory.
(9483 views)