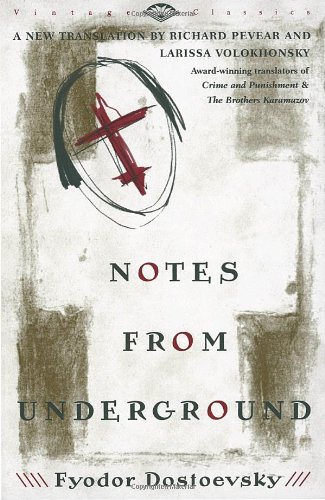 Notes from the Underground
by Fyodor Dostoyevsky

Description:
Dostoevsky’s most revolutionary novel, Notes from Underground marks the dividing line between nineteenth- and twentieth-century fiction, and between the visions of self each century embodied. One of the most remarkable characters in literature, the unnamed narrator is a former official who has defiantly withdrawn into an underground existence. In full retreat from society, he scrawls a passionate, obsessive, self-contradictory narrative that serves as a devastating attack on social utopianism and an assertion of man’s essentially irrational nature.

The Gambler
by Fyodor Dostoyevsky
The Gambler brilliantly captures the powerful compulsion to bet that Dostoyevsky, himself a compulsive gambler, knew so well. The hero rides an emotional roller coaster between exhilaration and despair, and secondary characters are unforgettable.
(10155 views)

The Brothers Karamazov
by Fyodor Dostoyevsky - The Lowell Press
The final novel by Dostoyevsky. It is the story of Fyodor Karamazov and his sons. It is also a story of patricide, into the sordid unfolding of which Dostoyevsky introduces a love-hate struggle with profound psychological and spiritual implications.
(6887 views)

Crime and Punishment
by Fyodor Dostoyevsky - P. F. Collier & son
The poverty-stricken Raskolnikov, believing he is exempt from moral law, murders a man only to face the consequences not only from society but from his conscience, in this seminal story of justice, morality, and redemption from the great novelist.
(12997 views)

The Idiot
by Fyodor Dostoyevsky - Vizetelly & Co.
Returning from a sanitarium in Switzerland, the epileptic Prince Myshkin finds himself enmeshed in a tangle of love, torn between two women -- Nastasya and Aglaia -— both involved with the corrupt, money-hungry Ganya. Translated by Eva Martin.
(9739 views)