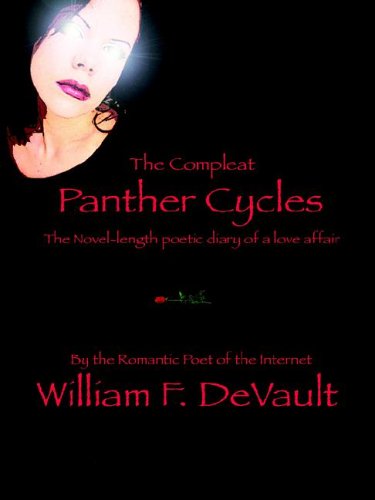 Description:
The full revelation of the legendary Panther Cycles. Written over a two year period, these more than six hundred and forty poems chart the ups and downs of the intensely dysfunctional love affair that ended a marriage and established William F. DeVault as the "Romantic Poet of the Internet". This volume has been called one of the most ambitious books of poetry ever written.

Leaves of Grass
by Walt Whitman
Walt Whitman created a daringly new kind of poetry that became a major force in world literature. First published in 1855 with only twelve poems, it was greeted as the most extraordinary piece of wit and wisdom that America has yet contributed.
(17696 views)

The Raven
by Edgar Allan Poe
The Raven is a narrative poem by Edgar Allan Poe. It is often noted for its musicality, stylized language, and supernatural atmosphere. It tells of a talking raven's mysterious visit to a distraught lover, tracing the man's slow descent into madness.
(9821 views)

Perverted Proverbs: A Manual of Immorals for the Many
by Harry Graham - Project Gutenberg
Virtue its own reward? Alas! And what a poor one as a rule! Be Virtuous and Life will pass Like one long term of Sunday-School. In this 'manual' Harry Graham takes issue with conventional pearls of wisdom in rhyming verse.
(8945 views)

Paradise Lost
by John Milton - Dutton
Paradise Lost is the great epic poem of the English language, a tale of immense drama and excitement, of rebellion and treachery, of innocence pitted against corruption, in which God and Satan fight a bitter battle for control of mankind's destiny.
(13241 views)