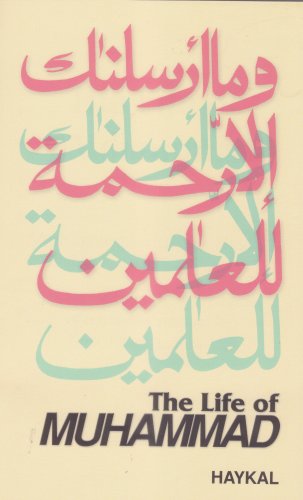 The Life of Muhammad
by Muhammad Husayn Haykal

Description:
Haykal achieves two objectives admirably: first, a biography which reveals the career of Prophet Muhammad (peace be upon him) in the full light of historic reality; second, bringing out the essence of Islam, as exemplified in the life of the greatest Muslim. It includes complete coverage of the Prophet's life, a detailed analysis of pre-Islamic Arabia, the situational context of revelation, and a comparative study of the basics of Islamic and Western civilizations.

Discovering Islam
by Sayed Moustafa Al-Qazwini - Islamic Educational Center of Orange County
An invitation to learn about the fundamental message, spirit, and practice of Islam. This book covers essential concepts, practices, and beliefs. It takes you through the core principle of the Oneness of God to the contemporary concept of jihad.
(10600 views)

The Koran (Qur'an)
- quran.com
The Koran admittedly occupies an important position among the religious books of the world. Though the youngest of the works belonging to this class of literature, it yields to hardly any in the effect which it has produced on large masses of men.
(12966 views)

Arabic Thought and Its Place in History
by De Lacy O'Leary - Kegan Paul and Company
A study of the mutual influence of Arabic and Western worlds during the Middle Ages. It traces the transmission of Greek philosophy and science to the Islamic cultures. The book presents a fascinating portrait of medieval Muslim thought.
(18507 views)

Peace and Jihad in Islam
by Sayyid Muhammad Rizvi - NASIMCO
There is a lot of misinformation and misunderstanding of the Islamic faith. The concept of jihad needs to be understood clearly. Many people in the media take Quranic text out of context. And so let us see: what is the meaning of jihad?
(7769 views)