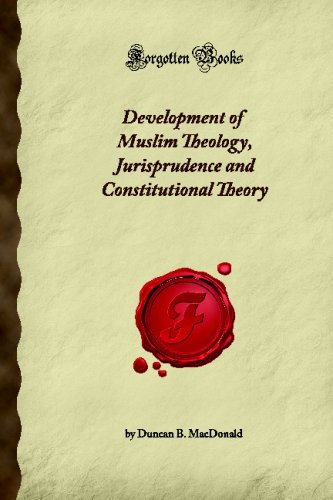 Description:
From the contents: constitutional development, development of jurisprudence, theology, illustrative documents, on the classification of muslim sects, the prophet in a tradition, a short creed by Al-ash'ari, a short creed by Al-ghazzali, articles of belief of Najm Ad-din Abu Hafs An-nasafi, the creed of Muhammad Al-fudali, analysis of the Taqrib of Abu Shuja Al-ispahani, on muslim history and on present condition of muslim world, on muslim traditions and law, on muslim theology, philosophy and mysticism.

Being Muslim in America
by George Clack, Michael Jay Friedman - U.S. Department of State
I am an American with a Muslim soul. My soul carries a long histor y of heroes, movements, and civilizations that sought to submit to the will of God. My soul listened as the Prophet Muhammad preached the central messages of Islam.
(7434 views)

Arabic Thought and Its Place in History
by De Lacy O'Leary - Kegan Paul and Company
A study of the mutual influence of Arabic and Western worlds during the Middle Ages. It traces the transmission of Greek philosophy and science to the Islamic cultures. The book presents a fascinating portrait of medieval Muslim thought.
(17335 views)

When Life Begins
by Bashir Nazir - Smashwords
English translation of the Urdu best-selling novel based in the Hereafter. It provides a comprehensive sketch of the world and life in the Hereafter in the form of a novel. The first book of its kind which was read by millions of Urdu reader.
(7193 views)

Peace and Jihad in Islam
by Sayyid Muhammad Rizvi - NASIMCO
There is a lot of misinformation and misunderstanding of the Islamic faith. The concept of jihad needs to be understood clearly. Many people in the media take Quranic text out of context. And so let us see: what is the meaning of jihad?
(7114 views)