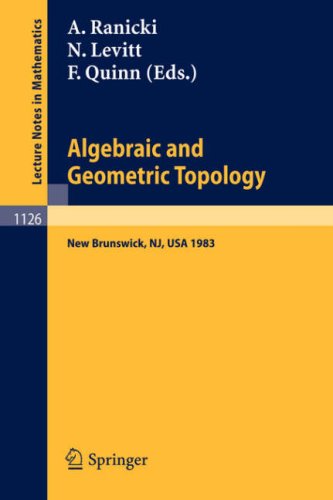 Description:
The articles in this volume present original research on a wide range of topics in modern topology. They include important new material on the algebraic K-theory of spaces, the algebraic obstructions to surgery and finiteness, geometric and chain complexes, characteristic classes, and transformation groups.

scl
by Danny Calegari - Mathematical Society of Japan
This is a comprehensive introduction to the theory of stable commutator length, an important subfield of quantitative topology, with substantial connections to 2-manifolds, dynamics, geometric group theory, bounded cohomology, symplectic topology.
(6690 views)

A Concise Course in Algebraic Topology
by J. P. May - University Of Chicago Press
This book provides a detailed treatment of algebraic topology both for teachers of the subject and for advanced graduate students in mathematics. Most chapters end with problems that further explore and refine the concepts presented.
(14793 views)

Elementary Topology
by O. Ya. Viro, O. A. Ivanov, N. Yu. Netsvetaev, V. M. Kharlamov - American Mathematical Society
This textbook on elementary topology contains a detailed introduction to general topology and an introduction to algebraic topology via its most classical and elementary segment centered at the notions of fundamental group and covering space.
(12388 views)