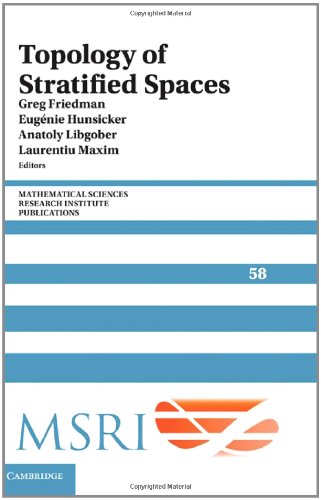 Description:
This book concerns the study of singular spaces using techniques from a variety of areas of geometry and topology and interactions among them. It contains more than a dozen expository papers on topics ranging from intersection homology, L2 cohomology and differential operators, to the topology of algebraic varieties, signatures and characteristic classes, mixed Hodge theory, and elliptic genera of singular complex and real agebraic varieties.

Topics in topology: The signature theorem and some of its applications
by Liviu I. Nicolaescu - University of Notre Dame
The author discusses several exciting topological developments which radically changed the way we think about many issues. Topics covered: Poincare duality, Thom isomorphism, Euler, Chern and Pontryagin classes, cobordisms groups, signature formula.
(6837 views)

Topology Illustrated
by Peter Saveliev - Intelligent Perception
The text follows the content of a fairly typical, two-semester, first course in topology. Some of the topics are: the shape of the universe, configuration spaces, digital image analysis, data analysis, social choice, and, of course, calculus.
(7387 views)

The Homology of Iterated Loop Spaces
by F. R. Cohen, T. J. Lada, P. J. May - Springer
A thorough treatment of homology operations and of their application to the calculation of the homologies of various spaces. The book studies an up to homotopy notion of an algebra over a monad and its role in the theory of iterated loop spaces.
(6889 views)