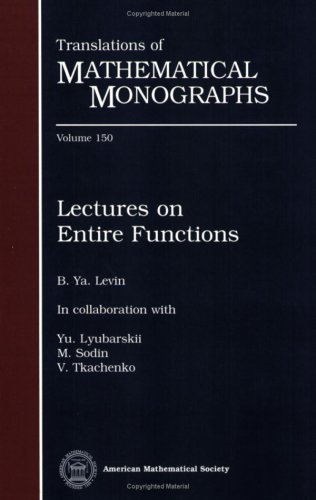 Lectures on Entire Functions
by B. Ya. Levin

Description:
This monograph aims to expose the main facts of the theory of entire functions and to give their applications in real and functional analysis. The general theory starts with the fundamental results on the growth of entire functions of finite order, their factorization according to the Hadamard theorem, properties of indicator and theorems of Phragmen-Lindelof type.

Functions of a Complex Variable
by Thomas S. Fiske - John Wiley & sons
This book is a brief introductory account of some of the more fundamental portions of the theory of functions of a complex variable. It will give the uninitiated some idea of the nature of one of the most important branches of modem mathematics.
(3708 views)

Complex Analysis
by C. McMullen - Harvard University
This course covers some basic material on both the geometric and analytic aspects of complex analysis in one variable. Prerequisites: Background in real analysis and basic differential topology, and a first course in complex analysis.
(8981 views)