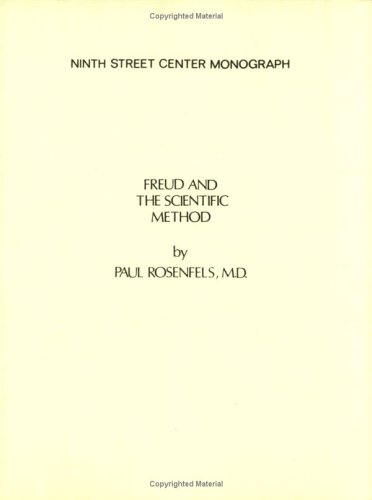 Freud and the Scientific Method
by Paul Rosenfels

Description:
Freud was not the scientist he thought he was. He was a towering literary figure, a communicator of the highest talents, who did his share to raise the consciousness of the civilized world in psychological matters. Now it is up to others to make something substantial out of the opportunity thus afforded by his pioneering zeal.

Psychopathology of Everyday Life
by Sigmund Freud - York University
While tracing back the abnormal to the normal state, professor Freud found how faint the line of demarcation was between the normal and neurotic person, and that the psychopathologic mechanisms could be demonstrated in normal persons also.
(13790 views)

The Theory of Psychoanalysis
by C. G. Jung
In these lectures Jung attempted to reconcile his practical experiences in psychoanalysis with the existing theory, or rather, with the approaches to such a theory. Some concepts are introduced which came to distinguish Jung's work from Freud's.
(7707 views)

Psychoanalysis: Its Theories and Practical Application
by A. A. Brill - W. B. Saunders
The main object of this book is to present the practical application of Freud's theories in one volume, hoping thereby not only to remove many false conceptions concerning psychoanalysis, but to stimulate further interest in Freud's original works.
(7638 views)

The Truth About Freud's Technique
by Michael Guy Thompson - New York University Press
M. Guy Thompson forcefully disagrees with the recent trend that dismisses Freud as an historical figure who is out of step with the times. He argues for a return to the forgotten Freud, a man rooted in a Greek preoccupation with the nature of truth.
(2571 views)