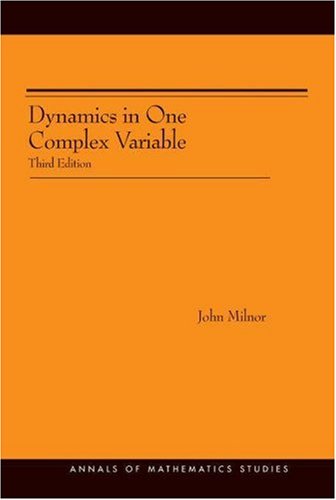 Dynamics in One Complex Variable
by John Milnor

Description:
This volume studies the dynamics of iterated holomorphic mappings from a Riemann surface to itself, concentrating on the classical case of rational maps of the Riemann sphere. These lectures are intended to introduce some key ideas in the field, and to form a basis for further study. The reader is assumed to be familiar with the rudiments of complex variable theory and of two-dimensional differential geometry, as well as some basic topics from topology.

Notes on Automorphic Functions
by Anders Thorup - Kobenhavns Universitet
In mathematics, the notion of factor of automorphy arises for a group acting on a complex-analytic manifold. From the contents: Moebius transformations; Discrete subgroups; Modular groups; Automorphic forms; Poincare Series and Eisenstein Series.
(8609 views)

Lectures on Riemann Matrices
by C.L. Siegel - Tata Institute of Fundamental Research
A systematic study of Riemann matrices which arise in a natural way from the theory of abelian functions. Contents: Abelian Functions; Commutator-algebra of a R-matrix; Division algebras over Q with a positive involution; Cyclic algebras; etc.
(5898 views)

Calculus of Residua: Complex Functions Theory a-2
by Leif Mejlbro - BookBoon
This is the second part in the series of books on complex functions theory. From the table of contents: Introduction; Power Series; Harmonic Functions; Laurent Series and Residua; Applications of the Calculus of Residua; Index.
(7480 views)