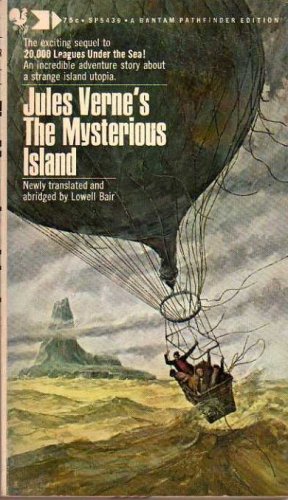 The Mysterious Island
by Jules Verne

Description:
Based on the true story of Alexander Selkirk, who survived alone for almost five years on an uninhabited island off the coast of Chile, The Mysterious Island is considered by many to be Jules Verne's masterpiece. Here is the enthralling tale of five men and a dog who land in a balloon on a faraway, fantastic island of bewildering goings-on and their struggle to survive as they uncover the island's secret.

The Survivors of the Chancellor
by Jules Verne - J.R. Osgood and Co.
Mr. Kazallon thought that passage on a ship from Charleston to Liverpool would be a charming way to return to his homeland. If only he knew! A disaster in the hold, storms and sharks are just some of the many travails that will beset passengers.
(3592 views)

The Great Navigators of the Eighteenth Century
by Jules Verne - Duckworth Publishers
Verne recounts the voyages of various European navigators to all parts of the globe. He gives detailed accounts of the explorers' climactic and navigational hazards, and their discoveries, conveying the sense of adventure enjoyed by the explorers.
(12042 views)

All Around the Moon
by Jules Verne
In this sequel to From the Earth to the Moon, Barbicane, Ardan, and Nicholl have decided to take a trip around the moon. But first they have to get to the moon from Earth. Will their trip succeed as they attempt to dodge asteroids?
(6660 views)

In Search of the Castaways
by Jules Verne - J. B. Lippincott
The contents of a shark's stomach contain a bottle that holds notes that give clues to the location of Captain Grant, whose ship was lost at sea. Lord Glenarvan makes it his quest to find Grant together with his wife and Grant's two children.
(9518 views)