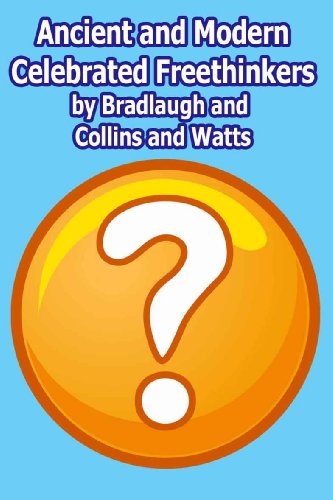 Ancient and Modern Celebrated Freethinkers
by Bradlaugh and Collins and Watts

Description:
In these pages, appearing under the title of "Half-Hours with the Freethinkers," are collected in a readable form an abstract of the lives and doctrines of some of those who have stood foremost in the ranks of Free-thought in all countries and in all ages.

The Philosophy of Immanuel Kant
by A. D. Lindsay - T.C. & E.C. Jack
All that the writer of a book like this can hope to do is to persuade others to undertake that study by interesting them in the problems with which it deals, and by offering a few suggestions which may help to an understanding of it.
(4794 views)

Farewell to Freedom: A Western Genealogy of Liberty
by Riccardo Baldissone - University of Westminster Press
From Homeric poems to contemporary works, the author traces the words that express the various notions of freedom in Classical Greek, Latin, and modern European idioms. This theoretical mapping shows old and new boundaries of the horizon of freedom.
(2724 views)

The Greek Philosophers
by Alfred William Benn - Kegan Paul, Trench, & co.
The appearance of a new idea can only be made intelligible by tracing the previous tendencies. The history of philosophy has itself a philosophy which requires that we go beyond particular phenomena and view them as related parts of a single system.
(5068 views)

A Pluralistic Universe
by William James - Longmans, Green, and co.
Lectures on the present situation in philosophy. Contents: The Types of Philosophic Thinking; Monistic Idealism; Hegel and his Method; Concerning Fechner; The Compounding of Consciousness; Bergson and his Critique of Intellectualism; and more.
(9392 views)