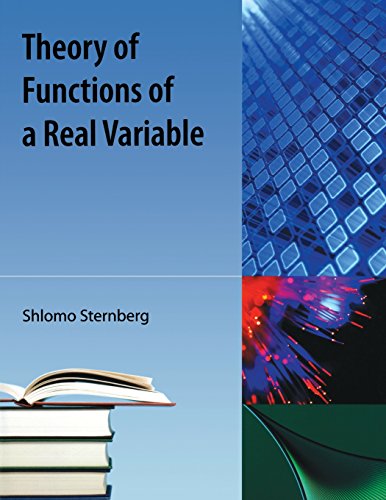 Theory of Functions of a Real Variable
by Shlomo Sternberg

Description:
I have taught the beginning graduate course in real variables and functional analysis three times in the last five years, and this book is the result. The course assumes that the student has seen the basics of real variable theory and point set topology. Contents: the topology of metric spaces, Hilbert spaces and compact operators, the Fourier transform, measure theory, the Lebesgue integral, the Daniell integral, Wiener measure, Brownian motion and white noise, Haar measure, Banach algebras and the spectral theorem, Stone’s theorem, scattering theory.

Fundamentals of Analysis
by W W L Chen - Macquarie University
Set of notes suitable for an introduction to the basic ideas in analysis: the number system, sequences and limits, series, functions and continuity, differentiation, the Riemann integral, further treatment of limits, and uniform convergence.
(13174 views)

Lectures on Lipschitz Analysis
by Juha Heinonen
In these lectures, we concentrate on the theory of Lipschitz functions in Euclidean spaces. From the table of contents: Introduction; Extension; Differentiability; Sobolev spaces; Whitney flat forms; Locally standard Lipschitz structures.
(7623 views)

Irrational Numbers and Their Representation by Sequences and Series
by Henry Parker Manning - J. Wiley & sons
This book is intended to explain the nature of irrational numbers, and those parts of Algebra which depend on the theory of limits. We have endeavored to show how the fundamental operations are to be performed in the case of irrational numbers.
(3166 views)