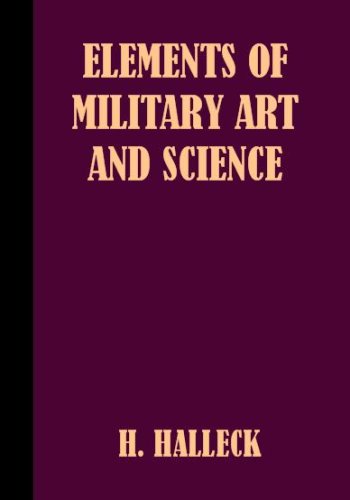 Elements of Military Art and Science
by Henry Wager Halleck

Description:
This is a work on Military tactics from an American Civil War General renowned for his cautiousness and belief in thorough preparations and defensiveness over quick, aggressive action. Adapted to the use of volunteers and militia.

The Ethics of Armed Conflict: A Cosmopolitan Just War Theory
by John W. Lango - Edinburgh University Press
Just war theory exists to stop armies and countries from using armed force without good cause. But how can we judge whether a war is just? In this original book, John W. Lango takes some distinctive approaches to the ethics of armed conflict.
(4086 views)

Fighting Instructions, 1530-1816
by Julian S. Corbett - Navy Records Society
The discovery of a number of seventeenth century Fighting Instructions seemed to encourage an attempt to make a complete collection. It is hoped that the collection may be of some assistance for a fresh study of the the development of naval tactics.
(7782 views)

Inside the Cold War: A Cold Warrior's Reflections
by Chris Adams - Air University Press
This book reflects a compilation of excerpts from an unpublished broader treatment that recounts the five decades of delicate coexistence between two nations known as the 'superpowers' during the international conflict known as the 'Cold War.'
(5866 views)

Psychological Warfare
by Paul Myron Anthony Linebarger - Duell, Sloan and Pearce
This book is the product of experience rather than research, of consultation rather than reading. I have tried to incorporate those concepts and doctrines which found readiest acceptance among the men actually doing the job.
(3478 views)