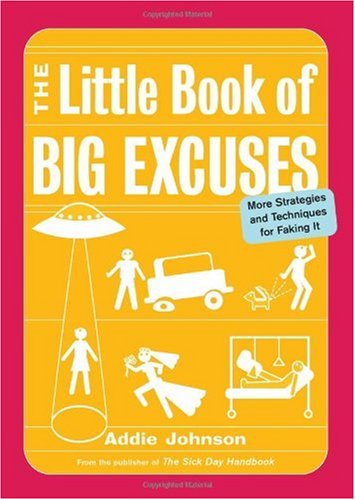 The Little Book of Big Excuses
by Addie Johnson

Description:
The Little Book of Big Excuses is the ultimate compendium of strategems for all excuse-meisters who want to weasel out and slack-off with impunity. Life is serious business, people, so pay attention. Let Addie help you off the hook.

Till You Drop
by Mat Coward - Smashwords
Suppose all the monsters in the world went on strike. Fear is an essential part of human life, and for centuries it's been provided by vampires, werewolves, zombies and ghouls. But what happens when the monsters take to the picket line?
(6222 views)

The Diary of a Nobody
by George Grossmith, Weedon Grossmith - A. A. Knopf
The diary of a clerk in London, an old fashioned humourous book. It documents in hilarious detail the everyday life of the lower middle class during the Great Victorian age. A classic masterpiece with some nice subtle humor.
(13060 views)

The Devil's Dictionary
by Ambrose Bierce - World Pub. Co
Satiric lexicon by Ambrose Bierce, first compiled as The Cynic's Word Book in 1906. The barbed definitions that Bierce began publishing in a weekly journal he edited in San Francisco, brought this 19th-century stock form to a new level of artistry.
(13384 views)

My Man Jeeves
by P. G. Wodehouse
A collection of short stories by P. G. Wodehouse, first published in 1919. Of the eight stories in the collection, half feature the popular characters Jeeves and Bertie Wooster, while the others concern Reggie Pepper, an early prototype for Wooster.
(10585 views)