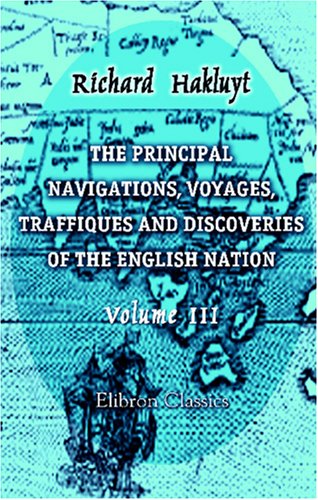 Principal Navigations, Voyages, Traffiques and Discoveries of the English Nation
by Richard Hakluyt

Description:
Topics: Voyages to the North and North East, from Arthur's Expedition to Norway in 517 to the celebrated Expedition to Cadiz; Voyages to the South and South East, beginning with that of the Empress Helena to Jerusalem in 337; Discovery of the West Indies in 1170; voyages of Columbus; etc.

The Great White North: The Story of Polar Exploration
by Helen S. Wright - The Macmillan co.
The material for this book has been gathered from the rich storehouse of Arctic Literature. I bring to the reader's mind a record of brilliant deeds that go to make the history of the far North, and let the explorers themselves tell the story ...
(3822 views)

Vitus Bering: the Discoverer of Bering Strait
by Peter Lauridsen - S. C. Griggs & Co.
Vitus Bering (1681-1741) was a Danish-born Russian navigator. Published in English translation for the American market in 1889, this sympathetic biography by the historian and geographer Peter Lauridsen, had originally appeared in Danish in 1885.
(6498 views)

The Australian Explorers
by George Grimm - George Robertson & Co.
The story of the exploration of Australia is one which we cannot let die. There are many reasons for keeping alive the remembrance of such heroic deeds. It is due to the memory of those men who took their lives in their hands ...
(5595 views)